You will learn to write a lit toon shader from scratch. The shader will be lit by a single directional light, and cast and receive shadows.

This tutorial will describe step-by-step how to write a toon shader in Unity. The shader will receive light from a single directional source, and have specular reflections and rim lighting. We will use the art style of The Legend of Zelda: Breath of the Wild as our reference, although we will not implement some of the more complex rendering techniques used in the game. Breath of the Wild divides surfaces into two bands of lightness, adding rim and specular on top. The rim is only applied to surfaces illuminated by the main directional light.
The completed project is provided at the end of the article. Note that it also contains a large amount of comments in the created shader file to aid understanding.

To complete this tutorial, you will need a working knowledge of Unity engine, and a basic understanding of shader syntax and functionality.

These tutorials are made possible, and kept free and open source, by your support. If you enjoy them, please consider becoming my patron through Patreon.

Download the starter project provided above and open it in the Unity editor. Open the Main scene, and open the Toon shader in your preferred code editor.

This file contains a simple shader that outputs a sampled texture, tinted by a color (with the default color set to cornflower blue). We will build off this file to create our toon shader. When writing shaders in Unity that interact with lighting it is common to use Surface Shaders. Surface shaders use code generation to automate the object's interaction with lights and global illumination. However, as our shader will only interact with a single directional light, it will not be necessary to use surface shaders.

We will set up our shader to receive lighting data. Add the following code at the top of the Pass, just after its opening curly brace.

The first line requests some lighting data to be passed into our shader, while the second line further requests to restrict this data to only the main directional light. You can read more about Pass tags here. 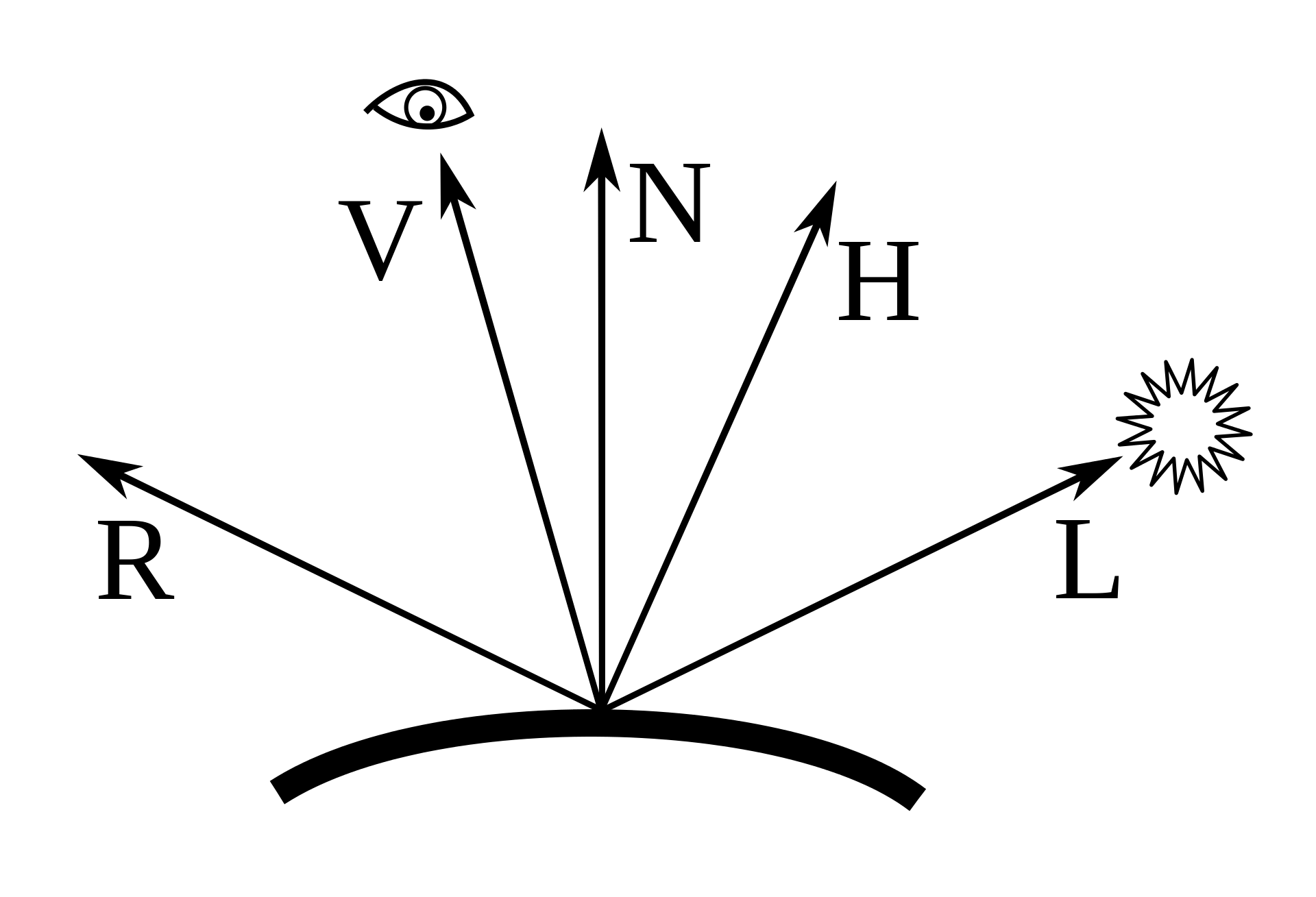 Blinn-Phong shading vectors, where L is the vector to the light source and N is the normal of the surface.

We'll need access to the object's normal data within our shader. Add the following code.

With the world normal now available in the fragment shader, we can compare it to the light's direction using the Dot Product.

Add the following to the fragment shader. Note that existing code that is modified will be highlighted in yellow. New code is not highlighted. This has rendered out a realistic style of illumination. To modify it to be toon-like, we will divide the lighting into two bands: light and dark. What if we wanted more than two discrete bands of shading?

We then sample the ramp texture with NdotL transformed to a UV coordinate that maps to the ramp, lightest to darkest.

NdotL is in the -1...1 range, so we transform it to be 0...1, and invert it so that the most illuminated surfaces map to the left of the texture, and the darkest to the right. This looks good, but the dark side is too dark; right now it is completely black. Also, the edge between dark and light looks a bit sharp, but we'll deal with that later. For now, we will add ambient light.

Ambient light represents light that bounces off the surfaces of objects in the area and is scattered in the atmosphere. We will model it as a light that affects all surfaces equally and is additive to the main directional light. You'll notice that modifying the intensity or color of the Directional Light in the scene does not affect our shader. We will add some code to include this in our lighting calculations.

What does [HDR] mean above the _AmbientColor property?

This is called a property attribute. Colors normally have their RGB values set between 0 and 1; The [HDR] attribute specifies that this color property can have its values set beyond that. While the screen cannot render colors outside the 0...1 range, the values can be used for certain kinds of rendering effects, like bloom or tone mapping.

When it comes to defining colors that represent lights, I like to allow them to extend to the HDR range, just like any other light in Unity can.

We multiply our existing lightIntensity value and store it in a float4, so that we include the light's color in our calculation. _LightColor0 is the color of the main directional light. It is a fixed4 declared in the Lighting.cginc file, so we include the file above to make use of the value.

Before going further, we'll soften the edge between light and dark to remove the jaggedness. Right now, the transition from light to dark is immediate and occurs over a single pixel. Instead, we'll smoothly blend the value from one to zero, using the smoothstep function. Comparison between smoothstep (left) and a linear function (right). The values are mapped to the greyscale background, as well as the curves in red.

smoothstep is not linear: as the value moves from 0 to 0.5, it accelerates, and as it moves from 0.5 to 1, it decelerates. This makes it ideal for smoothly blending values, which is how we'll use it to blend our light intensity value.

Our lower and upper bounds, 0 and 0.01, are very close together—this helps maintain a relatively sharp, toony edge. When NdotL is above 0.01 or below 0 it returns one and zero like before, respectively. However, in between that range it will smoothly blend between 0 and 1.

Specular reflection models the individual, distinct reflections made by light sources. This reflection is view dependent, in that it is affected by the angle that the surface is viewed at. We will calculate the world view direction in the vertex shader and pass it into the fragment shader. This is the direction from the current vertex towards the camera.

We'll now implement the specular component of Blinn-Phong. This calculation takes in two properties from the surface, a specular color that tints the reflection, and a glossiness that controls the size of the reflection.

The strength of the specular reflection is defined in Blinn-Phong as the dot product between the normal of the surface and the half vector. The half vector is a vector between the viewing direction and the light source; we can obtain this by summing those two vectors and normalizing the result.

We control the size of the specular reflection using the pow function. We multiply NdotH by lightIntensity to ensure that the reflection is only drawn when the surface is lit. Note that _Glossiness is multiplied by itself to allow smaller values in the material editor to have a larger effect, and make it easier to work with the shader. Once again we will use smoothstep to toonify the reflection, and multiply the final output by the _SpecularColor. Rim lighting is the addition of illumination to the edges of an object to simulate reflected light or backlighting. It is especially useful for toon shaders to help the object's silhouette stand out among the flat shaded surfaces.

The "rim" of an object will be defined as surfaces that are facing away from the camera. We will therefore calculate the rim by taking the dot product of the normal and the view direction, and inverting it. Once again, we'll toonify the effect by thresholding the value with smoothstep. With the rim being drawn around the entire object, it tends to resemble an outline more than a lighting effect. We'll modify it to only appear on the illuminated surfaces of the object.

This is better, but it would be useful to be able to control how far the rim extends along the lit surface. We'll use the pow function to scale the rim. As a final step, we will add the ability for our shader to cast and receive shadows. Shadow casting is very simple. Add the following line of code below the entire Pass (outside the curly braces). UsePass grabs a pass from a different shader and inserts it into our shader. In this case, we are adding a pass that is used by Unity during the shadow casting step of the rendering process.

In order to receive shadows, we will need to know in the fragment shader whether a surface is in a shadow or not, and factor that in to our illumination calculation. To sample the shadow map cast by a light, we'll need to transfer texture coordinates from the vertex shader to the fragment shader.

We include Autolight.cginc, a file that contains several macros we will use to sample shadows. SHADOW_COORDS(2) generates a 4-dimensional value with varying precision (depending on the target platform) and assigns it to the TEXCOORD semantic at the provided index (in our case, 2).

TRANSFER_SHADOW transforms the input vertex's space to the shadow map's space, and then stores it in the SHADOW_COORD we declared.

Before we can sample the shadow map, however, we need to ensure our shader is set up to handle two different lighting cases: when the main directional light does and does not cast shadows. Unity will help us handle these two configurations by compiled multiple variants of this shader for each use case. You can read more about shader variants here. We will use a built-in shortcut to compile our variants. Add the following line of code just below the #pragma fragment frag line.

This shortcut instructs Unity to compile all variants necessary for forward base rendering. We can now sample the value in the shadow map, and apply it to our lighting calculation.

SHADOW_ATTENUATION is a macro that returns a value between 0 and 1, where 0 indicates no shadow and 1 is fully shadowed. We multiply NdotL by this value, as it is the variable that stores how much light we received from the main directional light. Toon shaders come in a wide variety of graphical styles, but achieving the effect usually centers around taking a standard lighting setup (as we did with Blinn-Phong) and applying a step function to it. In fact, when normals and lighting data is available it can be done as a post process effect. An example of this can be found in this tutorial for Unreal Engine 4.

Leave me a message

Send me some feedback about the tutorial in the form below. I'll get back to you as soon as I can! You can alternatively message me through Twitter or Reddit.